Brazil’s participation in World War II was the culmination of a foreign policy emphasis that began in 1902. That year, Foreign Minister Rio Branco set Brazil on a course of close relations with the United States. He believed that ties with the United States, a growing world power, would promote Brazil’s aims at leadership in the Latin American region and provide international prestige.

After the 1930 revolution and 1937 coup that brought Getúlio Dornelles Vargas to power, Brazil’s political priorities were industrialization and the build up of military power. The country balanced its relationship with the United States through closer ties with the Axis powers of Nazi Germany, Italy and Japan.

Germany became the biggest buyer of Brazil’s cotton and its main supplier of weapons. Brazil’s leading politicians were divided between “Pro-USA” and “Pro-Axis” factions. Concern that the Latin American region could shift away from the United States politically prompted the administration of President Franklin D. Roosevelt to launch its “Good Neighbor” policy of cultural and economic assistance in place of an earlier policy of direct intervention in Latin American affairs.

Brazil and the United States adopted neutral positions in September 1939 on the outbreak of war in Europe. However, the United States became concerned about a potential German attack on the Western Hemisphere should Britain fall, figuring the most likely route for this to be from North Africa to northeastern Brazil. In 1941, Brazil agreed to the construction and enlargement of American air bases in northern and northeastern Brazil.

When the United States entered the war in 1941, the U.S. Navy was allowed to use Brazilian ports in its anti-submarine campaign. The air bases became an essential part of the Allied air transport system, a stopover for planes heading to Africa, the Mediterranean and points beyond.

Natal, the largest and most important air base in Brazil

The World War II gave an impulse to the growth of Natal and surroundings.

It is estimated that, before the War, Natal had 40,000 inhabitants; after the war, not only the population doubled to nearly 80,000 inhabitants, but the city also had improvements in the infrastructure and one airport (the airport of Parnamirim).

The Americans only entered the War on December 7th 1941, when the Japanese attacked Pearl Harbour; however, since the eclosion of the conflict, in 1939, the Americans were watching with preoccupation the expansion of the Axis powers.

American strategists were concerned with an eventual movement from the Axis towards the American continent; since 1940, Italians and Germans were occupying positions in North Africa; the next step could be the invasion of South America.

In 1939, the Major Delos C. Emmons, commander of the US Air Force, overflew the coast of Brazilian Northeast, and concluded that Natal was the most strategic point, both for a German invasion and for the Allies to use as a supporting site to the operations in Africa.

The US were not at war yet, and, to not create diplomatic tensions, decided to create a Program for Development of Airfields; to avoid the direct envolvement of the US government, the airline company PanAm was the co-signer of the agreement.

The first airplane to land in Parnamirim was the “Numgesser-et-Coli”, a monomotor Breguet-19, piloted by Dieu Coster et Le Brix, on October 14th 1927; before then, only aquaplanes arrived in Natal, on the waters of the Potengi River. According to Clyde Smith Junior, this was itself a Historic flight, because it was the first inter-Atlantic flight in the East-West direction. There was not an airport, however; instead, there was little more than the runway.

With fundings of the US government, the “Parnamirim Field” was constructed. It became the largest US basis outside American territory. Not only the airport, but also the infrastructure (roads, housing, etc) was built from ground.

Thousands of Brazilians migrated to Natal, looking for work. Also, Brazilian soldiers were sent to the Army and Navy bases. These movements explain the growth in population during the period.

After US entered the war, there was no more need for diplomatic actings. On December 11th 1941, a US Navy fleet composed by 9 aircrafts PB4 Catalina and one Clemson arrived in Natal; two weeks later, 50 marines arrived, to patrol the basis.

It is estimated that, during the War, between 3,000 and 5,000 Americans were located in Parnamirim. Also, tens of thousands of Americans and British passed by Natal, in transit. Parnamirim was the busiest airport in the world; flights were taking off and landing every three minutes.

Brazil supplied iron ore, manganese, bauxite, tungsten, industrial diamonds and especially rubber to the United States during World War II. The Japanese occupation of Southeast Asia had halted 90 percent of world rubber supplies. Brazil received $100 million in arms and military equipment under the Lend-Lease Program, through which the United States supplied its allies.

Brazil’s close cooperation attracted attacks on its merchant shipping by Axis submarines. Italian and German submarines sank a total of 36 Brazilian merchant ships by August 1942 when Brazil declared war on the Axis powers.

After an initial reluctance to commit troops to the war effort, Brazilian politicians decided that their country’s direct participation would achieve it a special status after the war. The Brazilian Expeditionary Force started as a political project to make Brazil a “special ally” of the United States.

Britain opposed the involvement of Brazilian troops partly because of perceived pro-Axis sympathies of some Brazilian politicians, and partly because of troops of too many nationalities in the Mediterranean Theater. Doubts that the BEF would be deployed in combat at all led to its nickname “the Smoking Cobras.” This referred to a Brazilian saying, equivalent to “pigs might fly,” stating that it would be more likely for a snake to smoke than for the BEF to be deployed. As a result, the BEF insignia was a coiled cobra with head upright and smoking a pipe. 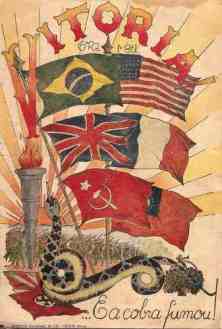 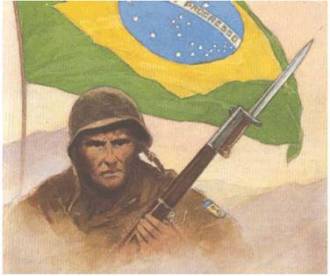 The U.S. government considered deploying the BEF in southern Brazil on the Argentine frontier following coups in Argentina in 1943 and 1944, and a 1943 Argentina-inspired coup in Bolivia. However, the Americans conceded to BEF deployment in Italy because of Brazilian wartime cooperation. A total of 25,335 Brazilian troops came under the command of the U.S. Fifth Army. They fought in battles at Castelnuovo, Monte Castello and Montese in the Apennines south of Bologna. Brazilian military and political leaders rejected Allied offers to remain as an occupying force in postwar Europe. In late 1945, the FEB returned home and was disbanded.